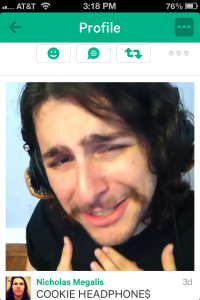 Over two years ago I started using the app Instagram. It wasn’t as popular as it is now at the time, but I always enjoyed taking photographs. I loved how Instagram made my photographic abilities look much more impressive than it they really are but often thought “why don’t they have a video app like this?”

Yes, YouTube is a great platform for lengthy videos – but there was a definite void to fill when it came to a quick “status update” video.

Vine came to the iPhone masses in early January and had a great introduction, due to being developed by Twitter. For me, I downloaded Vine immediately, but it took awhile before I saw potential. (Or knew how to use the dang thing!)

Now that I’ve become a frequent Vine user I have found that there are a few “Vine celebrities” starting to appear and figured I’d give you a breakdown of what my personal favorite Vine accounts are.

2. Jerome Jarre – Jerome is a happy dude. That’s all I can say. He’s constantly going around New York City spreading his love of life by being super awkward and making people uncomfortable. It’s hilarious to watch, probably not so hilarious to be a part of.

3. Brittany Furlan – This chick is crazy. Brittany is an actress and comedian from California that is often playing practical jokes on her boyfriend, her dog, and the American public. Her videos are enjoyable because they are never over-the-top or over-produced. They are just her having fun. She’s relatable and, honestly, enjoyable.

4. Ian Padgham – Ian is a Twitter illustrator and video animator. He does amazing stop-motion videos using random objects around him including clay, sketches, books, cards and even a cute little wooden guy.

5. Nicholas Megalis – Nicholas Megalis is Vine’s most famous singer-songwriter. He develops new songs about such things as “Cookie Headphones” and “Solid Gold Pizza”. Nothing makes sense..but I’m okay with it.

Now you know who to follow, get to Vining! I’m telling you – sometimes those 6 second videos are much more enjoyable and entertaining than half the rubbish on TV these days.

PrevPreviousWhy Google Authorship is Important!
NextJulie Takes on Code: What I LearnedNext