New Emojis update June 2018, because are our lives really complete without a cupcake, bagel, toilet paper or ginger emoji.

What is an Emoji?

A majority of smartphone users have probably seen or used an Emoji, some might have seen one and not even known it was an ‘emoji’. According to http://www.dictionary.com/  an Emoji is “a small digital image or icon used to express an idea, emotion, etc., in electronic communication.”emoji liven up your text messages with tiny smiley faces”” 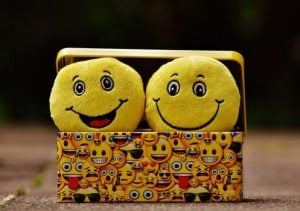 Our online expressions and emotions could be changing how our brains process our emotions. For example, when we look at a frowny face emoji, our brain is activated to change our mood or feeling to that face we recognized. Now this doesn’t necessarily seem like a problem but Emojis are everywhere they are winking, smiling, crying and laughing at us everywhere we go. There are now aspects for every part of our lives from what we ate for lunch to what pets we have. But, is there more to Emojis rather than what meets the eye?

Emojis now serve as a form of nonverbal communication, with 2,823 emoji available in total it almost serves as a language. Emojis are now doing what the tone of voice does on the phone and the expressions and gestures of  face-to-face communication. We read Emojis as emotions and symbols rather than words. This is a new pattern our brains are trying to create.

Is it going too far?

Google altered the salad emoji by removing the egg to appeal to vegans.  Not only are tangible meals being updated to meet vegan dietary requirements, but pixelated ones too. Is this going too far or just being inclusive to all?

Unicode is even taking request from consumers of emojis they want to see next. The red head emoji that was just released was a result of many requests over the past months.

There is now an “emojipedia” a universal code to what each emoji means. Check it out here: https://emojipedia.org/

Jump on the Bitmoji Trend

A bitmoji is a personal emoji that people can create to look exactly like them. It is a way of personalizing the emojis. It allows consumers to personalize their emoji, everything from eye color, hair length , and even designer outfit lines. This creates a more personal unique experience for users.

Where will it go in the future?

Will we keep getting emoji updates forever? How many emojis are possible? Either way, thank goodness, we now have a toilet paper and bagel emoji, how would  we have communicated without it!

PrevPreviousEverything That Social Media Services Know About Me
NextAre You Ready for a Custom Site?Next